Sputnik Is Ready For Launch 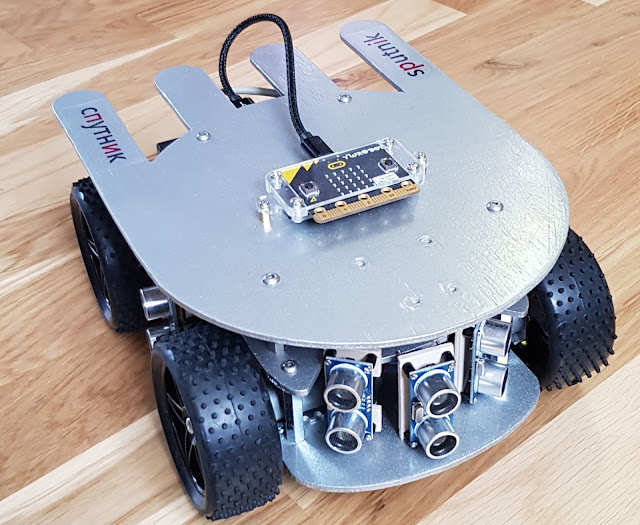 So - this is the last post before the blogging deadline. No doubt there will be more to come - after the judging has been done - but this post marks the end of the first Pi Wars challenge for us.

We've been quite happy with the blog so far - the main achievement has been to keep it going. We've been trying to publish at least one new post a month detailing progress.

Personally my favourite post is Tears, Cheers and Motor Gears which was written after a very difficult period in the build when I wasn't sure we would keep going.

As we're nearing the blogging deadline, we thought it would be a good idea to show the stages of Sputnik's development in pictures. Development started in September 2018 to make sure we could actually build a controllable robot before applying for Pi Wars 2019. 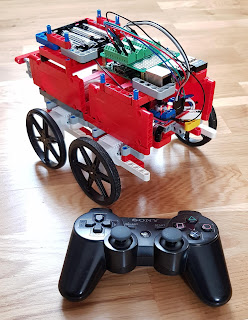 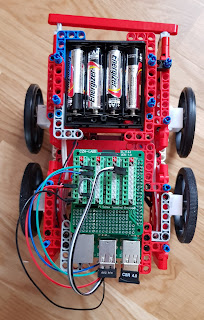 Once the Pixy 2 camera was fitted I wrote some quick code to implement the Hubble Telescope Nebula Challenge.

I went for a very simple algorithm where the robot looks for the colours, remembers the positions and then attempts to move towards them in the correct order. There's a few backup bits of logic, so if it can't find the next colour after spinning to where it thinks it is it will look for it again.

Using bits of coloured paper in the kitchen We were able to test it out and fix the initial issues. Sometimes it worked - sometimes it didn't. It was difficult to filter out false matches from the background - but in the real test with black walls we were hoping to have less issues.

Also when moving towards the colours, we were using a timing mechanism so that when we reached the zone we reversed for the same time as we moved forward to get back to the centre. This was woefully inaccurate, so we had to come up with a new solution, and decided to use the distance sensors to help out.

Now when the start button is pressed, the robot will record the distance to the wall from the front sensor. Then when it reverses, it uses the front 45 degree mounted sensors to reverse to the same distance. This works extremely well.

Once the code was at least proved, we waited for another trip to Robot Club to try it out on the real thing.

A lot has happened in the last few weeks. Sputnik has a new paint job - all silver and sparkly, we've fitted the Pixy2 camera (and got it to work to some extent) and decided to finalise our solution to the Space Invader challenge.

When we applied for Pi Wars back last September, we had planned to use the balls to knock down the target. The idea was to build some kind of ball kicker powered by a solenoid or servo to propel the balls towards the target.

Then - when we went through a couple of iterations of motors, we thought we could use the spare motors to make a Nerf bullet launcher. We built a prototype with lego. Everyone stood back for the first lauch, only to see the bullet struggle through the lego barrel and drop to the floor. Looking at other posts the motors being used are running at something like 1800rpm - so our little micro motors were never going to make it. So that idea was shelved.

We then built a lego kicker - using a small servo motor. The prototype didn't quite have enough power to move the balls in a straight line.

At the time, we were still on the reserves list, so there wasn't a great worry. Then when we got the call to take part, we realised we were going to have to work out something - however primitive.

This is what we came up with: