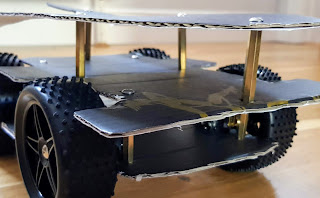 Looking at some of the other Pi Wars competitor's blogs and seeing the wonderful designs rendered in CAD packages we thought we'd have a go ourselves. However after 5 minutes with FreeCAD it quickly became clear that the only thing we would have by March next year would be a design.

So we went old school CAD - Cardboard Aided Design. This was really useful as we could see how big the robot would actually be and see any limitations. For instance, whilst it looked good on paper, the weight distribution was all wrong. The ground clearance was too low and it would just bump into a slope steeper than about 5 degrees, so the design has been simplified a lot and made more compact.

One thing that threw us was that I misread the height of the walls in the straight line test as 70cm rather than 70mm, so didn't worry too much about where the distance sensors were going to go. Then when we realised they had to be quite low, we started putting a lot more bodywork between the wheels to mount them on. Now that we've got a cardboard model we've played around with mounting the sensors and realised we can mount them on stalks without worrying about any complicated bodywork.

After a fast start prototyping with Lego, progress has slowed slightly as we need to spend some time building the actual chassis. That's the next task.

Hoping we get the green light this weekend on our Pi Wars application.